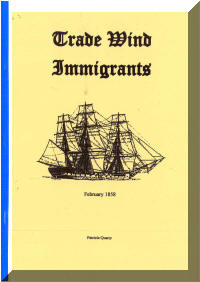 On 6th November 1857 the immigrant ship "Trade Wind" sailed from Gravesend, England on its voyage to Van Diemen's Land. On board were 294 immigrants, most of whom were Bounty passengers sponsored by the Hobart Town Immigration Society and the Launceston Immigration Aid Society. Reverend Drake had gone to England for the purpose of selecting the immigrants and he returned to the Colony with them, accompanied by his wife and child. Other cabin passengers included Mrs Johnston, the wife of the captain; a Miss Bradshawe and some children, and the surgeon Dr Walter Tibbits. Captain Johnston, the master of the ship, was assisted by 34 crew.

The "Trade Wind" anchored at the Iron Pot Lighthouse at the mouth of the Derwent River on 23rd February 1858 and was boarded by the Government Health Officer who directed that the ship proceed to the Quarantine Station at Impression Bay. There had been deaths on the voyage caused by Typhus Fever and because of the presence of fever the ship was not permitted to berth at the Port of Hobart Town.

In quarantine two more children died and it was some months before all passengers were fit enough to continue their journey and thus begin a new life in the Colony. Complaints were laid against the Cook, the Master and First Mate for their treatment of these passengers and upon investigation it was determined that the complaints were justified. The Immigration Agent compiled an 81 page report which he submitted to the Colonial Secretary detailing the conditions on board the ship during its voyage to the Colony.

The Immigration Agent found that the ship was carrying more than it was legally entitled even after two male passengers were put on the ship's articles and one female passenger was placed in the cabin as a servant. The layout of the ship with its temporary partitions and ventilation was of concern to the Agent. The ship had been converted to carry these immigrants and the Agent stated that although it was a roomy vessel " ... where there might have been ample space means could scarcely have been devised for giving to the immigrants a smaller amount of accommodation than was allotted to them."

Upon investigation it was found there was inadequate ventilation throughout the berths, the hospital was ill placed, the toilet facilities were not sufficient and were a danger to health, and the cooking apparatus for the passengers " ... was of an old construction and of the rudest and most imperfect kind being likewise in bad order."

There were two water closets for the use of the women and children. Both  were imperfectly constructed and leaked, and one was unserviceable and out of use for most of the voyage. The surgeon had ordered it to be closed as prejudicial to health.

The passengers not only complained of the physical conditions on board this ship but also of the ill treatment by the cook.