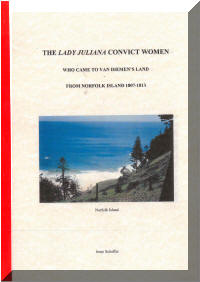 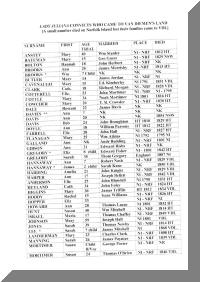 The Lady Juliana lay six months in the River Thames while the goals were emptied and the women placed on board. She finally sailed from Portsmouth England on the 29th July 1789 and arrived at Port Jackson on 3rd of June 1790. The Lady Juliana was the first female convict ship to sail to the Colony of NSW and the first sailing of any convict ship since the first fleet sailed in 1788.

When the ship was out to sea every man on board took a convict women for his wife. The number of female convicts on board the Lady Juliana varied, but it seems that 244-5 was the number that arrived in NSW. The voyage took twelve months less one day, calling into many ports. While in these ports it was an open ship, and was later to become known, as the 'Floating Brothel'.

Before leaving England the good ladies of London donated fifty suits of child linen. This linen was to be used by the mid-wife in the event of there being children born on the voyage. There were seven births and five deaths. At least eight children accompanied their mothers, four of these later came to VDL.

Sixty women from the Lady Juliana came to VDL either with their husbands or alone between 1805-1815, of these 27 were first fleeters.

You will notice that many on the women on the Lady Juliana were what could be regarded a fairly old. There were overall:

These women who had survived the terrible conditions in England and a unspeakable voyage first to Port Jackson and then to Norfolk Island, found themselves having to yet again pull up roots after nearly twenty years, and start again in the new settlement of VOL. The records reveal that most of them were wives, mothers, and in some cases grandmothers who went on to make a place for themselves and their families. Their descendants are proud to claim them as their ancestors, despite how they arrived in the Colony.