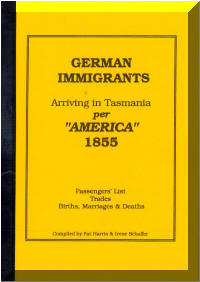 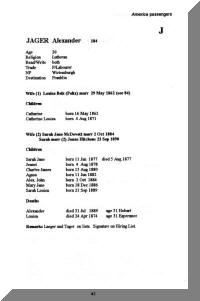 In the 1850's several ships brought German immigrants to Tasmania. Among them were the Montmorency, Wilhelmsberg, San Francisco and America. Hamburg was the port of departure for most European immigrants but it was not uncommon for some to travel to Hull and then across England to Liverpool. Mostly these travelled on to America and only a few to Australia. Over 83,000 immigrants left for Australia from British ports in 1854 but this number dropped to 52,000 the following year.

The America was a 706 ton, 2 gun packet with a crew of 22. Owned by James Baines & Co. of the Blackball Line. The Captain was John Gardyne, the Surgeon Charles Willes. William Kirchner sponsored all the Germans on board, having purchased 300 tickets in May 1854.

On her only voyage to Australia the America sailed from the Mersey at Liverpool on April 15, 1855 and arrived in Hobart on July 23, a voyage of 99 days. It was an unfavourable voyage with an outbreak of measles soon after departure, and rough and contrary winds most of the way.

There were 21 deaths on board mostly from complications following measles. An apprentice member of the crew was lost overboard when he fell from the main yard arm. Of the six births on the voyage, five died before reaching port and the other died on July 31, 8 days after the ship arrived

There were 283 German passengers on board, 45 married couples, 101 single adults over 14 years, and 92 children under 14 years. Of the married couples, three travelled on single tickets (as marriage was just prior to departure) and one couple was not married. Also on board were 11 passengers from the UK, and Mr. R. M. Shaw was the only cabin passenger. One immigrant J.H. Mullen was listed but was not on board.

The vessel was anchored at Half Moon Bay in the Derwent River when the pilot J. Hurburgh came on board at 8am on 23 July.

Passengers were complimentary to the Captain for their treatment on board. The ship was quarantined and re-surveyed before its departure on August 28 1855, under ballast, for Bombay. The America was later transferred to the Quebec timber trade and was lost in 1862. The Surgeon's report indicates that on the whole the immigrants were of good character and would settle well, once the language barrier was overcome. Many could read and write but only in their own language.

On arrival the hiring agent John Loch had an interpreter present to assist the immigrants, The Hobart's agents for the ship were Kerr, Boyle & Co.

The spelling of most German surnames has changed over the years, with the translation from German to English. Some were changed during W.W. 1 or 2, to avoid persecution. Some reverted back later, others did not (eg Haas/Hayes).

It was surprising to find how many marriages there were between passengers and even between families eg. of 4 Nicolai children, 3 married Lohreys and the other to a Haas. Large numbers of the immigrants settled on the East Coast, Huon, New Norfolk and Hobart. Very few ventured to the North & North West

The trades of those on board were varied as can be seen from the listing taken from the Mercury newspaper on July 27.

The following passenger index gives the area where first employed (if a position was gained). On the hiring list (CB7/16/3) the employer is also named. In some cases this includes the signature of the employer or his agent, and occasionally the employee. All adult passengers signed an agreement to stay in the colony for 4 years unless payment (pro rata to time stayed) was repaid to the sponsor. This included the passengers from the UK. CB7/44/P118 shows some who left before the 4 years was completed and the amounts they paid before leaving. Two from America left under a different name. Shipping costs for bringing the German passengers out were £18 per adult over 14, £.9 children 3-13, and £ 4-10-0 for under 3 years. For deaths on board the fee was reduced by half.

Some passengers have proved to be elusive to locate. This may be due to a name change or perhaps some left the State soon after the 4 years. There were large German settlements in South Australia & N.S.W., and it was the time of the gold rush in Victoria. Church records not available at G.S.T. Inc. Launceston Branch have not been researched.