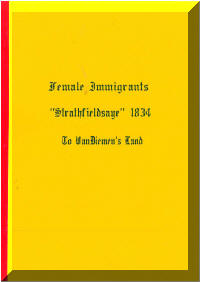 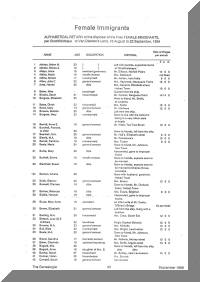 During 1834 emigrants of all kinds arrived in the Colony of NSW. Aboard the Strathfieldsaye were 272 free women and children. the manner in which they were selected and treated on landing was a disgrace to those whose duty it was to make the necessary arrangements. About one hundred respectable females were by flattering prospects induced to leave their friends and relations, to better themselves in an almost unknown land - poverty, no doubt, was the chief inducement for such abandonment of al 1 that was dear and cherished - such young females must have had extraordinary courage to have bidden adieu to their native country, when al 1 before them was an ocean of uncertainty. When the purveyors of this cargo found difficulty in persuading a sufficient number of respectable females to undertake the voyage, the work houses and the London streets were scoured, in order to make up the number, and enable these traders in human flesh to obtain the money proferred by the Government on the dispatch of the vessel. thus the first cargo was a mixture of all classes - there were to be found the offspring of the once wealthy, and the most destitute prostitute of the London streets - these were mingled together, and before the voyage was completed, before some little distinction could be made, many a fair creature had fallen into a gulph of vice and infamy.

On Saturday, the free females were landed from the "Strathfieldsaye". Of all the disgusting, abominable sights we ever witnessed, nothing ever equalled the scene which took place on that occasion. It is well known that the females of the "Strathfieldsaye", are of a far superior order to the those hitherto sent us by the Home Government - poverty being the greatest crime of the greatest part of them. It is true that a small portion of the number are not of that description, which ought to have been allowed to have associated with the innocent; but that indiscriminate mixture of virtue and vice, is, not, at present the subject before us. Early on Saturday morning, it was known all over the town, that the free women were to land at mid-day. The "Strathfieldsaye" was bedecked with all the colours on board, and great was the preparation. about eleven o'clock, some were stowed in one of the ship's boats, and then another boat went alongside, and was filled - and others followed in succession. Those that had first left the vessel, had to remain on the water upwards of an hour, before all the boats were stowed, when they were all towed towards the New Jetty. At this time the mob waiting to witness the landing of the women, could not be less in number than a couple of thousand. As soon as the first boat reached the shore, there was a regular rush towards the spot, and the half dozen constables present, could scarcely open a passage, sufficient to allow the females to pass from the boats; and now the most unheard of, disgusting scene ensued - the avenue opened through the crowd a considerable length, and as each female passed on, she was jeered by the blackguards who stationed themselves, as it were, purposely to insult. The most vile brutal language was addressed to every women as she passed along -